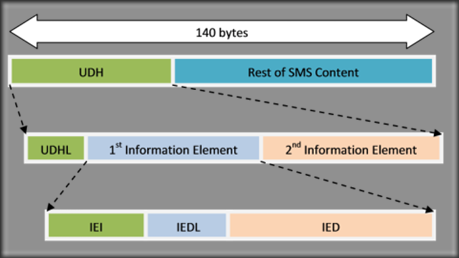 Below is some information on how to configure your laptop for use with a GPRS-enabled mobile phone, for Internet access.

On the PC, go to the Networking section of the Control Panel (Start > Settings > Control panel > Network)

NOTE :- If your phone is not listed as a modem install the proper drivers before continuing

Posted by Jason Jebanesan at 12:34 AM No comments:

Note: This isn't intended as a guide to hacking *other people's* weak passwords. Instead, the aim is to help you better understand the security of your own passwords and how to bolster that security.

If you invited me to try and crack your password, you know the one that you use over and over for like every web page you visit, how many guesses would it take before I got it?

Let's see… here is my top 10 list. I can obtain most of this information much easier than you think, then I might just be able to get into your e-mail, computer, or online banking. After all, if I get into one I'll probably get into all of them.

Statistically speaking that should probably cover about 20% of you. But don't worry. If I didn't get it yet it will probably only take a few more minutes before I do…

Hackers, and I'm not talking about the ethical kind, have developed a whole range of tools to get at your personal data. And the main impediment standing between your information remaining safe, or leaking out, is the password you choose. (Ironically, the best protection people have is usually the one they take least seriously.)

One of the simplest ways to gain access to your information is through the use of a Brute Force Attack. This is accomplished when a hacker uses a specially written piece of software to attempt to log into a site using your credentials.

So, how would one use this process to actually breach your personal security? Simple. Follow my logic:

Assuming the hacker has a reasonably fast connection and PC here is an estimate of the amount of time it would take to generate every possible combination of passwords for a given number of characters. After generating the list it's just a matter of time before the computer runs through all the possibilities – or gets shut down trying.

Pay particular attention to the difference between using only lowercase characters and using all possible characters (uppercase, lowercase, and special characters – like @#$%^&*). Adding just one capital letter and one asterisk would change the processing time for an 8 character password from 2.4 days to 2.1 centuries. 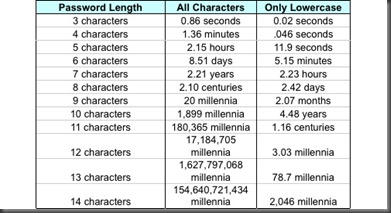 Remember, these are just for an average computer, and these assume you aren't using any word in the dictionary. If Google put their computer to work on it they'd finish about 1,000 times faster.

Now, I could go on for hours and hours more about all sorts of ways to compromise your security and generally make your life miserable – but 95% of those methods begin with compromising your weak password. So, why not just protect yourself from the start and sleep better at night?

Believe me, I understand the need to choose passwords that are memorable. But if you're going to do that how about using something that no one is ever going to guess AND doesn't contain any common word or phrase in it.